The Governing Council of the University of Uyo, at its 74th Meeting, announced the new Registrar of the University. He is Mr. Aniediabasi Daniel Udofia, who hails from Obotim Nsit, Nsit Ibom Local Government Area of Akwa Ibom State. 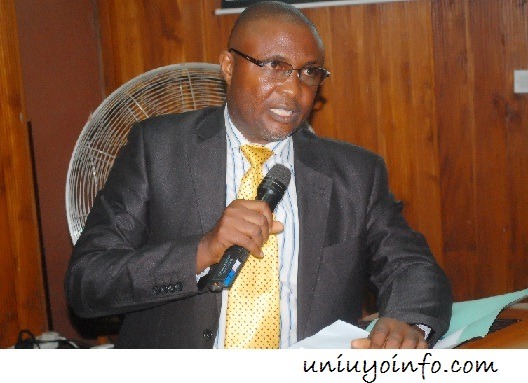 Born in 1968, in the Village of Obotim Nsit, the young Aniediabasi Udofia had his Primary School education in the community’s Primary School. From there he proceeded to the Samuel Bill Theological College, Abak, where he had his secondary school education. As a bright young chap, Mr. Udofia immediately furthered his tertiary studies in the now defunct University of Cross River State, where he obtained his first degree, B.Sc (Ed.) (Hons) in Political Science in 1991. Mr. Udofia’s thirst for knowledge which was whetted with the acquisition of a first degree drove him to enroll for and earn two masters’ degrees: M.Sc (Ed.) Educational Technology and M.Sc. International Relations in the years 2000 and 2002 respectively, both obtained from the University of Uyo.

Mr. Aniediabasi Udofia has attended various seminars, conferences and workshop since his debut in the public service some of which are: a Seminar on Management of Higher Education Institutions, June 28 to July 9, 2012 which took place in Israel; a Training Programme on the Freedom of Information Act (FOIA), 2015 in Lagos, and a course on Advanced Digital Appreciation Programme for Tertiary Institutions (ADAPTI) February 29 to March 4, 2016, in Abeokuta. Mr. Udofia is a Fellow, Chartered Institute of Public Management of Nigeria (FCIPN); Member, Nigerian Institute of Management (MNIM), and Member, Association of University Administrators (MAUA).

He has also served in various panels and committees as Secretary and member, a few of which are: Sixth UNIUYO Convocation Planning Committee, 2004 (Secretary); Staff School Management Board, 2005 -2010 (Secretary), and Investigation Panel on Alleged Case of Vandalization of Generator in the Registrar’s Official Residence, 2009 (Member).

Mr. Udofia has applied the skills garnered from his wealth of experience to handle special assignments and community service efficiently as he has been; a Presenter of a Career Counselling Programme on Akwa Ibom Broadcasting Corporation (Radio Service) 90.5FM, 1994 – 1999; Treasurer, Qua Iboe Church, Aka Itiam, Uyo, 2008; and Coordinator, Uyo Branch of Samuel Bill Old Boys Association, 1999 – 2011, among others.